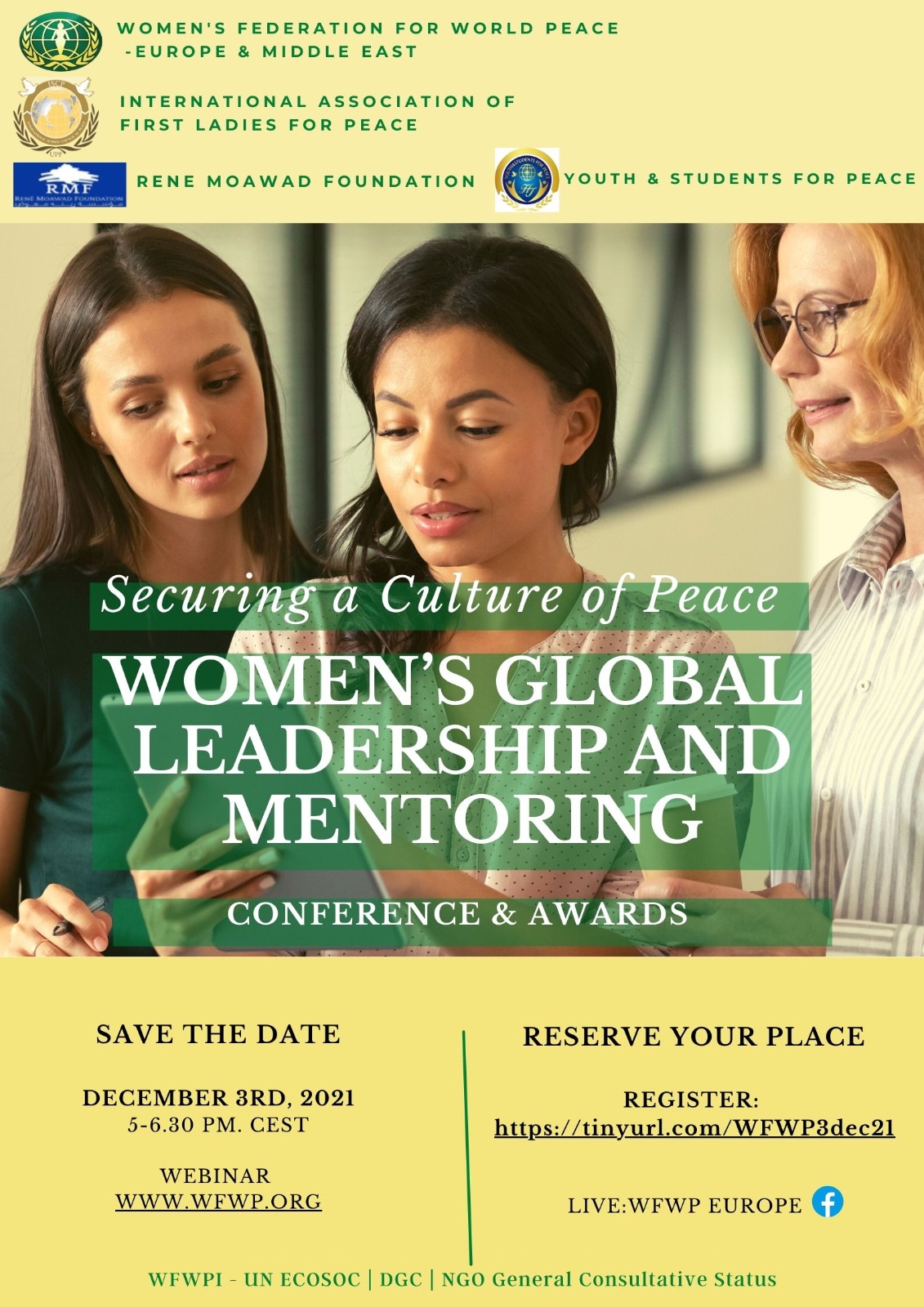 “SECURING A CULTURE OF PEACE:

We hope this letter will find you well and safe!

The Women’s Federation for World Peace Europe and Middle East cordially invites you to participate at a virtual conference on the theme, “Securing a Culture of Peace: Women’s Global Leadership and Mentoring” to be held on December 3rd, 2021.

On this occasion, First Ladies and their mentees will engage in a stimulating intergenerational dialogue to give shape to the notion of “culture of peace” for our times. Noble declarations, such as the Universal Declaration of Human Rights are many, but societies everywhere need role models who will guide and inspire people to live by these declarations.

First Ladies and other influential women have a unique role in designing and influencing a future peace culture rooted in shared prosperity and core values. As private and public figures they can affect their nations positively while they may hold special relationships with youth and their issues.

We would like to invite you to participate in the discussions about the challenges women’s leadership is facing in the world and the contribution of intergenerational cooperation to solving the multidimensional issues that appear as obstacles to a harmonious and thriving society.

We believe your wisdom and expertise would be a significant contribution to the success of our conference and we hope for your positive reply.

Please accept the assurances of our highest esteem and consideration.

“SECURING A CULTURE OF PEACE:

rights, and education and passed important legislations affecting their lives.

Hon. Emanuela Del Re, EU Special Representative for the Sahel (Sahara Area Nations); Former Vice Minister Foreign Affairs; President of the Standing Committee on the implementation of Agenda 2030 and sustainable development Expert on Conflict Studies, Italy; Member of the Italian Chamber of Deputies since 2018. Vice-Minister of Foreign Affairs and International Cooperation in both President Conte Government I and II. Since March 2021 member of the Foreign Affairs Commission at the Italian Parliament; researches on field of conflict and areas in transition since 1990, following the social-political-economic transformation of countries / regions such as the Balkans, the

Professor of Portuguese Language and Culture, she has been dedicating her attention to education and culture issues, but also to social solidarity and cohesion. Her activity agenda included the challenges that families and the youth face in today’s world, or the new demands in social assistance. Since the 1980s and the 1990s, when her husband was Prime Minister, attending institutional events, as well as contacting with organisations, associations and several entities of the civil society, is a large part of her daily routine.

Speakers on the Panel

Hon.   Dr. Neziha Labidi, Minister of Women, Family, Children and Seniors from September 2016 to March 2020, Director of Women’s Promotion in the Ministry of Women and Family between September 2005 and December 2011. Currently she is vice-president of the Think Tank IPASSS (Institute for Prospective and Advanced Strategic and Security Studies), President of the Women Peace and Security Commission of the African Women’s Leader Network (AWLN)-Tunisia (Réseau des Femmes Leaders Africaines chapitre Tunisie). AWLN is under the aegis of the African Union Commission (AUC) and         the United Nations (UN).

Mag. Muttonen is committed to strengthening conflict resolution capacities in international organizations in foreign policy. Other priorities include the emphasis on the role of women in conflicts (in connection with UN Security Council Resolution 1325) and   nuclear disarmament.

Hon. Edlira Ҫepani, National Coordinator for the Women’s Network “Equality in Decision Making”, created in 2008, network of women and girls in politics and decision making from all political parties, media, business and civil society, now a strong voice supporting the promotion of gender equality in Albania; led national wide campaigns for gender equality and has contributed actively to key reforms for the representation of women and girls in decision making, Board member of national and international organizations, Edlira has contributed towards the development and restoration of health centers, schools and kindergartens in rural areas of Albania. Engagement campaigns for social change,

supporting the communities in need.

Moderator: Ms. Kyung In van de Ven Oliveira is born and raised in Amsterdam the Netherlands, and has been a youth representative of the WFWP Europe since 2011, and of the Dutch WFWP Chapter since 2014. She has recently joined the UN Intl. WFWP team in Vienna and is currently working as a legal guardian and child’s advocate of unaccompanied minor asylum seekers at the national guardian institution in the Netherlands

Mrs. Marlies Ladstätter, President of IAYSP Austria ( Since 2020 ) 2009-2011 – 2 years volunteer at the Oceania Leadership Team – collecting donations for Service Project such as school kindergarten renovations/support of building new ones in small villages in Fiji and Solomon Islands, 2014-2015 – Masters in Tourism Destination Management at NHTV Breda, Netherlands, Since 2020 – Assistant to the Management Board of the Austrian Red Cross, Vienna, Youth Team Coordinator of the Universal Peace Federation Austria.

Mr.Oussama Kebir, Doctoral student at the Institut Supérieur de Gestion de Tunis and Officer in the Tunisian Army. He is a military Officer, weapon systems engineer and doctoral candidate in artificial intelligence from the Higher Institute of Management, University of Tunis. After joining the army in 2010, he became a military officer with an atypical career, skilled in Analytical Skills, Crisis Intervention, Strategic Planning, Research, and Management. Currently, he is doing his doctoral research in Computer science and artificial intelligence by   applying them in the field of terrorism. He presented some recent

publication in local and international conferences.

Mrs. Elarinda Xhindi, Lawer, with almost 10 yrs. of  practice. She loves her job, because it allows her to help people, what fits her protective nature. She frequently participates in conferences and trainings on topics like emotional intelligence, team work, career managements, and public speaking. Certified in Minors’ Friendly Law by the Council of Europe and Human Rights Education for Law Professionals. Her first novel: “Values  Never Go Out of Fashion”(2021). The novel talks about the strength of women to fight hardships in order to reach their rightful place in the family, society and important state structures.

Elarinda’s motto is: “There is nothing that can be achieved without difficulty, but there is

always happiness after difficulty, so never give up!”

her vision is to unwaveringly participate in the empowerment and development of the marginalized population, especially in Lebanon and its South.  After the sudden abduction of her brother Imam Moussa Sadr in 1978, she worked constantly to keep the Foundation active despite all the political crises, financial distresses and security unrests. Thus the Foundation was able to set milestones in social change and equity at grass-root level by working closely with local communities in Lebanon on health, education, empowerment, and promoting a culture of dialogue and reconciliation. Rabab Sadr’s determination has

always been to empower those who have no opportunity and to advocate their rights.

Mrs Christelle Carine Ollandet; assistant to the Ambassador Extraordinary and Plenipotentiary of the Republic of Congo in Italy; Attaché to the Permanent Representation of the Congo to the United Nations Organizations based in Rome (FAO, IFAD and WFP); author of the book » jeune, Pilote ou passager de sa destination » published in 2021 by Editions Universitaires Européennes

Since 1995 she is Co-founder of the «OLLANDET SAVANE» school complex in Brazzaville and in 2015 she founded the children’s day care centre «WINNER PARK» in Brazzaville.

Mrs. Irina Bogacheva, secretary of the expert council on education of the State Duma of Russia,  President of the Charity Fund “Revival and hope” (created in 2009) that helps talented children, young people and disabled children, promoting traditional family values, intercultural dialog and cooperation, charity programs for families in need and large families, families with adopted children, families with disabled children The Fund also helps orphans to find their families. The motto promoted by the Fund is: “To give love and kindness and to do even small things but with great love”. More than 5000 children from different parts of Russia received support.

The René Moawad Foundation was created on November 22, 1991, on the second anniversary of President René Moawad’s assassination. He had been elected President of the Lebanese Republic on November 5, 1989 and was killed 17 days later. He is remembered as believer in the unity of the Lebanese people and actively strove towards civil peace, dialogue, national unity and the equality of all Lebanese citizens.

The idea for the creation of the Foundation came from the late President’s spouse, former Minister of Social Affairs, and MP, Nayla Moawad. She, and other prominent members of the Lebanese civil society worked together to create a foundation that

. is inspired by and dedicated to the principles that President Rene Moawad strove to uphold throughout his life.

Since its creation over 25 years ago, RMF has worked tirelessly to help develop and enhance Lebanese society through improving education, economic empowerment, provision of social and health care, and the promotion of democratic values to the most marginalized and needy communities throughout Lebanon. The René Moawad Foundation has grown from a small grassroots organization into a well-respected and nationally recognized NGO, cooperating with many different national and international institutions and organizations in the pursuit of a more peaceful, prosperous and democratic Lebanon.

As RMF has grown and evolved over the years as an organization, it always remains true to its roots and values in honour and remembrance of President Rene Moawad, whose desire for a better Lebanon will never be forgotten.

This website uses cookies to improve your experience while you navigate through the website. Out of these, the cookies that are categorized as necessary are stored on your browser as they are essential for the working of basic functionalities of the website. We also use third-party cookies that help us analyze and understand how you use this website. These cookies will be stored in your browser only with your consent. You also have the option to opt-out of these cookies. But opting out of some of these cookies may affect your browsing experience.
Necessary Siempre activado
Necessary cookies are absolutely essential for the website to function properly. This category only includes cookies that ensures basic functionalities and security features of the website. These cookies do not store any personal information.
Non-necessary
Any cookies that may not be particularly necessary for the website to function and is used specifically to collect user personal data via analytics, ads, other embedded contents are termed as non-necessary cookies. It is mandatory to procure user consent prior to running these cookies on your website.
GUARDAR Y ACEPTAR
Ir a Arriba